These first nails remind me of a Pop Star. The little stars are a stamp and the pink shatter is a Sally Hansen crackle polish. 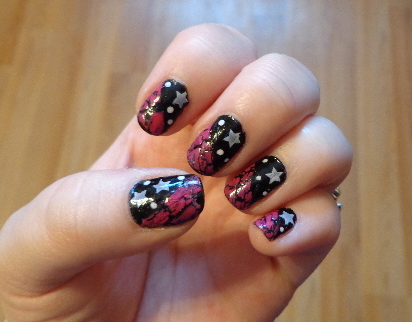 PAC-MAN!!! I have wanted to do these for so long. You would think that the little Pac-man dude would be easy but for some reason it took me forever. It may be because I am somewhat of a perfectionist...lol If you ever do this make sure to get some striping tape for the straight lines; it worked wonders! 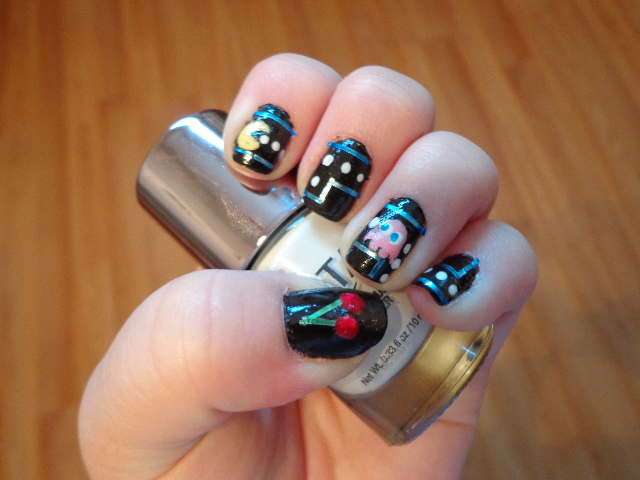 These ones were inspired by a shirt that I bought while I was in GA. The shirt is grey and black striped with a skull and a few hearts. I can't do little skulls so I figured just hearts would work. :) The pink on all of my nails is the new Sugar Coat from Sally Hansen, it's textured and so much fun! And I topped it all off with a matte top coat.

Now for my current nail design, Van Gogh's Starry Night. This is another one that I've wanted to do for a while and just haven't. I got the idea from Cute Polish's Video on YouTube. 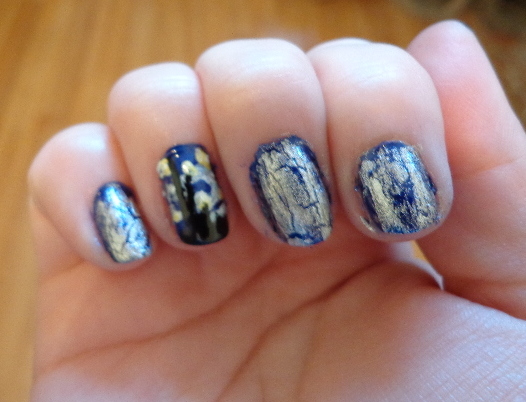 Here's a close up of the thumb nail on my left hand. Yes, my LEFT hand. Please someone note this as the only week that my left hand will look more realistic than my right hand. :) YAY for impressionistic art! 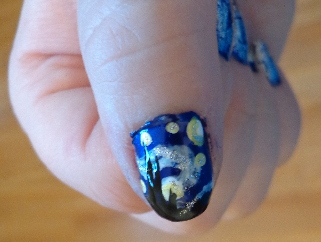 I hope you liked my nail designs. I can't wait to decide what to do next week! I got a pretty new holo polish while I was in GA too, so I may have to try that one out.

Ok, so I have all sorts of chocolate in my office, this is a well known fact. My dear friend Peggy doesn't know how I can keep chocolate in my office and not eat it all. Truth be told I keep a stockpile mainly for my co-workers. It is known that if they ever need chocolate, there will always be some in my office waiting for for the much needed pick-me-up. I have come into work and will randomly find $5 bills in my desk, that's when I know that we need more chocolate. lol Don't get me wrong, I do eat the chocolate too. I have those days when I can't have enough chocolate but most of the time it goes untouched and waits patiently for my co-workers.

Well, I have discovered that there is one chocolate that won't last in my office...those would be Mini M&M's. I don't know what it is, but those are gone in a blink of an eye. It's a "now you see it, now you don't" trick, I just don't know how it happens. lol

That brings me to my quizzical question...What candy can you not resist and is eaten before you have a chance to blink?

Jessyisms: words that Jessy has made up or re-defined

s]
adjective
1. combination of the words Fantastic and Fabulous
2. used mainly as a birthday wish
Origin:
2011; Jessyism: Born out of my addiction to Doctor Who (Fantastic is the 9th Doctors "catchword") and my love of the word Fabulous.


Holy Hannah [hoh-lee han-uh]
phrase
1. used as an exclamation of surprise
2. often used in place of swear words
Origin:
Before the dawn of time; Jessyism


Linner [lin-er]
noun
1. combination of the words lunch and dinner
Origin:
Before the dawn of time; Jessyism

l]
noun
1. combination of the months March and April

"Whoa There Turbo" - Used as a signal to slow down or take it easy; almost always said to cars in passing or inanimate objects.


Real words that have been Jessyfied:

Peachy [pee-chee]
adjective
1. horrible; unpleasant
2. usually said in a high-pitched tone with emphasis on the first part of the word
3. most commonly used on a bad day or when cranky

Things I've said when my tang gets tungled:
These are most commonly uttered in the morning or when I'm extremely tired.

Coffa Cupee
i.e. It's morning and I need a coffa cupee (Obviously)


Sayings that have been stolen:
"...that's so stinkin' cute" - Stolen from Julie. I find myself saying this more and more especially when I am around her.
"Hello Dear (or Deary)" - Stolen from Peggy. I have never greeted someone as "Dear", I usually say "Hon" but Peggy has worn off on me.

What I Am Writing About